How to Finish a Documentary

By tellmystoryAugust 28, 2020About Us, Lutz Documentary, Other

Pt. 3 from Behind the Scenes Stories from making Carl Lutz: Dangerous Diplomacy

Over 15 years had passed from when Mike Moehring and Bryan Boorujy began to create a film telling about the life and accomplishments of Carl Lutz, Swiss diplomat and rescuer of tens of thousands of Jews. They had yet to finish making the documentary after years of delays and set-backs. In 2015, the duo decided to push forward and complete the story without additional funding.

Interviews had been conducted years before and the script slowly refined over time. During research, they discovered several sources for archival video footage and personal and professional photographs. While personal sources freely offered what they had about Lutz’ story to aid the documentary, government and historical sources usually charged a fee. Bryan and Mike kept tally, hoping any profits off the final product would recoup their expenses. In the end, they determined not to allow the price-tag to hinder them from making the film with excellence. 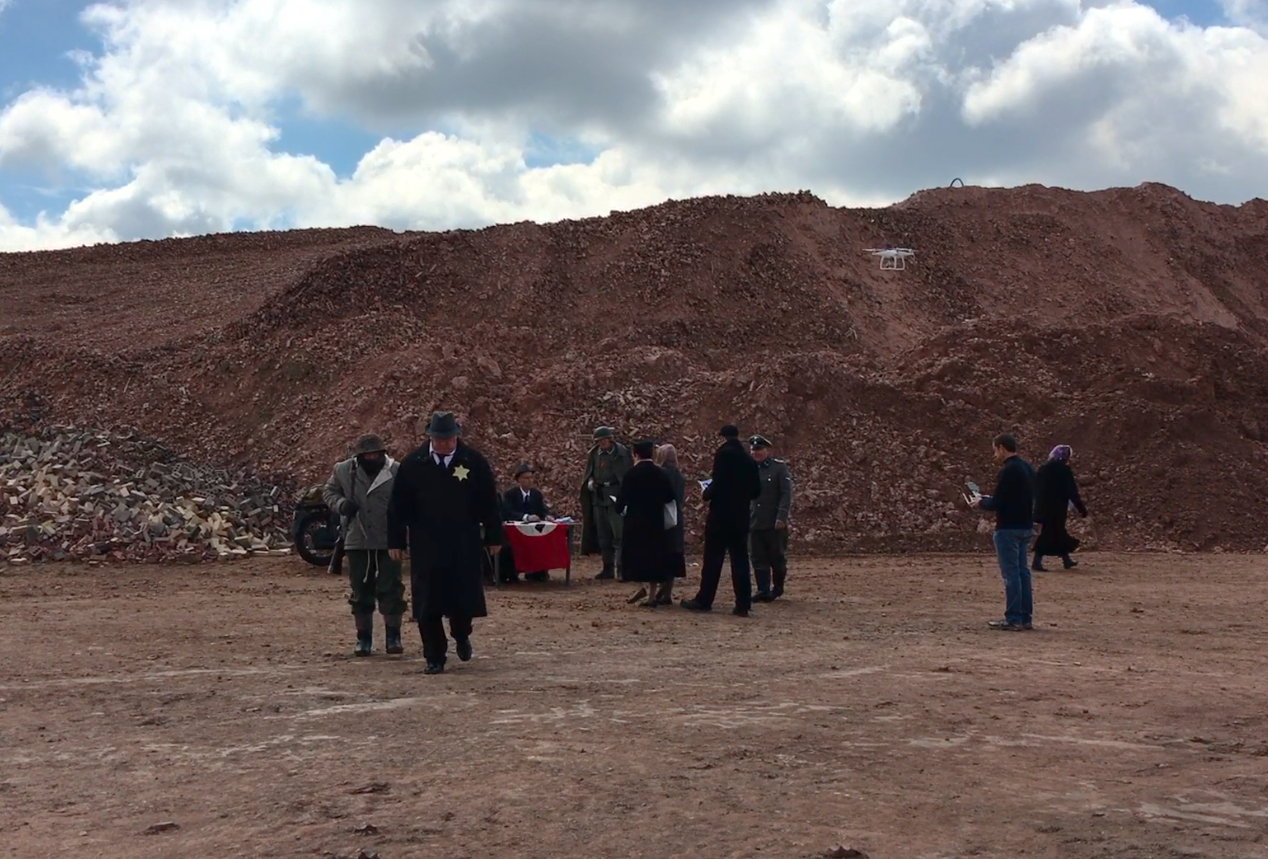 There were many areas of the story for which they could not find footage or photos to illustrate. Creating reenactments to fill this void would be another big hurdle. In a recent interview with the production team, Bryan recalled how it felt when they marked out the list of needed scenes.

Bryan: It was like, “Oh my gosh, how are we going to do all these?” but one by one we got them done and we had some pretty awesome locations and helpful people.

Mike: Yeah, we really did. We had great locations. We had great people that we worked with. I think the reenactments add so much more to the story.

Mike filmed the first reenactment, young Lutz at the train station, at the Durham Museum in Omaha. In Colorado, a construction materials business allowed the team to film a group of volunteer actors and historical reenactors, and to even bring in a WWII motorcycle for the Obuda brickyard scene. The Grant-Humphreys Mansion in Denver gave the team access to film the variety of indoor scenes in exchange for a visual tour. Through the generosity of these businesses, reenactors, and friends, the world of Carl Lutz came to life. 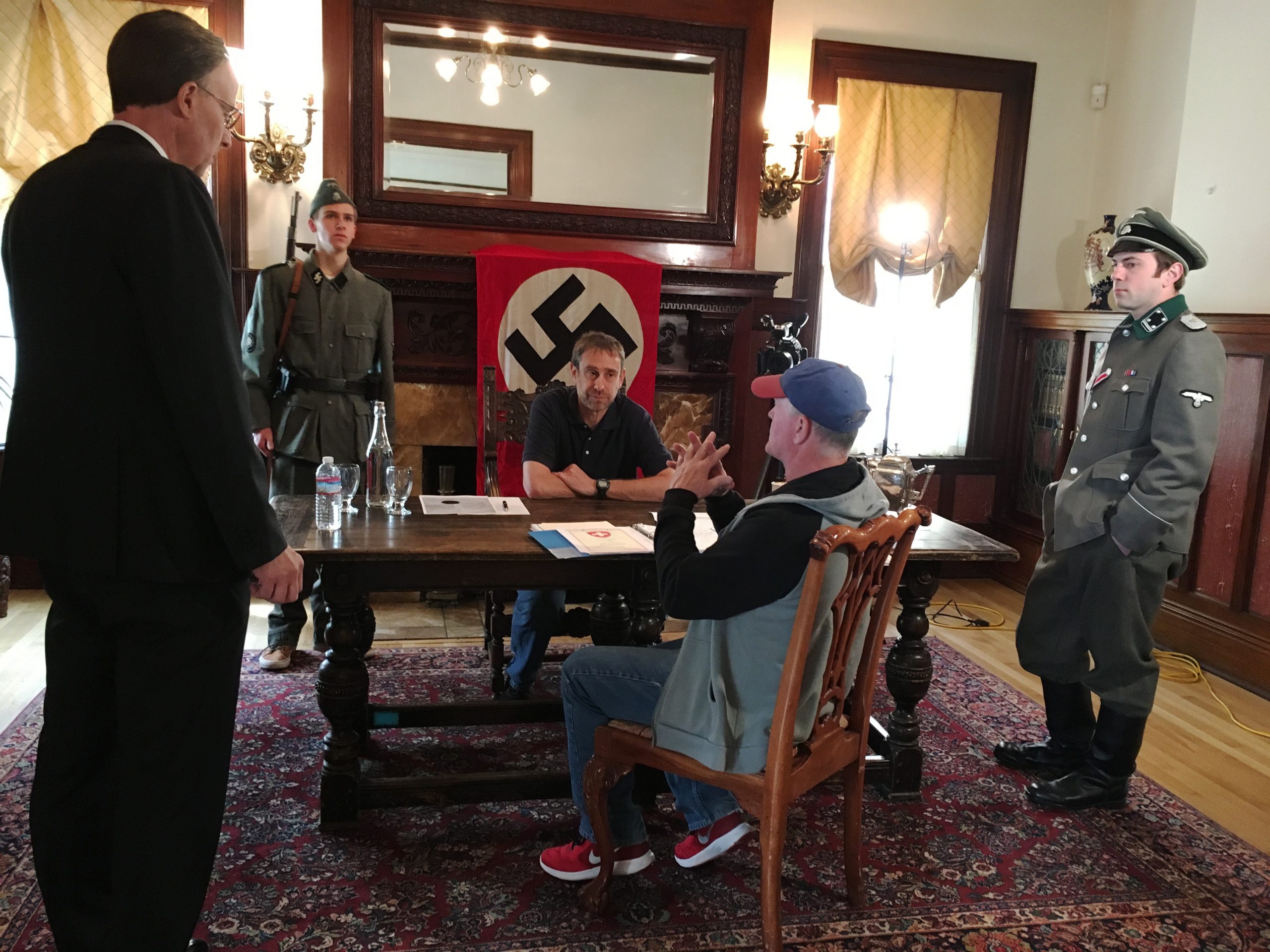 Mike and Bryan discuss the scene with the actors playing Lutz and a Nazi officer.

Now that the visual content was gathered, a large chunk of time was necessary to piece it all together. Many creatives prefer to jump into a project all the way instead of dedicating a couple hours here and there. As an editor, Bryan had that same need for full commitment to a project, and so he was able to complete the editing while between paid projects.

Bryan’s daughter, Erika, helped make the 3D photos and maps. Bryan scoured music libraries to create the perfect score. A friend of Mike’s recorded the narration. Finally, the documentary was ready for Mike to contact the list of possible distributors.

In the early days of making the documentary, there had been several interested distributors though none had been able to commit at the time. Now that the finished product was in hand, the team was surprised to find themselves come full circle. The very first footage to be shot had been edited in borrowed space at a buddy’s studio. That same man now owned Exploration Films, the company who is finally distributing Dangerous Diplomacy.

As younger men, Mike and Bryan had heard tales of video makers taking decades to complete projects. The narratives seemed preposterous at the time, but 20 years later those stories make sense. They had encountered eager helpers and rejection, personal setbacks and distractions, but now they could move on with the satisfaction of a realized dream. And in the end, finishing it in 2020 has its advantages.

Continue the story in Part 4: “Why Did it Take You so Long?” – The Unexpected Benefits