“Why Did it Take You so Long?” – The Unexpected Benefits

By tellmystoryOctober 2, 2020About Us, Lutz Documentary, Other

Pt. 4 from Behind the Scenes Stories from making Carl Lutz: Dangerous Diplomacy

This spring, Visual Legacy Productions and New Destiny Films finally celebrated the release of the documentary we’d worked on for about two decades— Carl Lutz: Dangerous Diplomacy. It tells the inspiring story of how one courageous man used his position to save tens of thousands of Jewish lives in the face of Nazi extermination during WWII. You may wonder why the journey to finally make this story available for the world to see took so long. In this segment of our blog series, we’ll share five reasons why the impact of time passing ended up being for good. Indeed, while the delay seemed like a loss at first, it ended up having some unexpected benefits.

In a meeting with co-producers/directors Mike Moehring, Bryan Boorujy and writer Chris Easterly, they recalled some of their early hopes, struggles and joys of making Carl Lutz’s story come to life. When they began to pursue making this film, they were joined by a handful of other highly-interested and invested individuals. 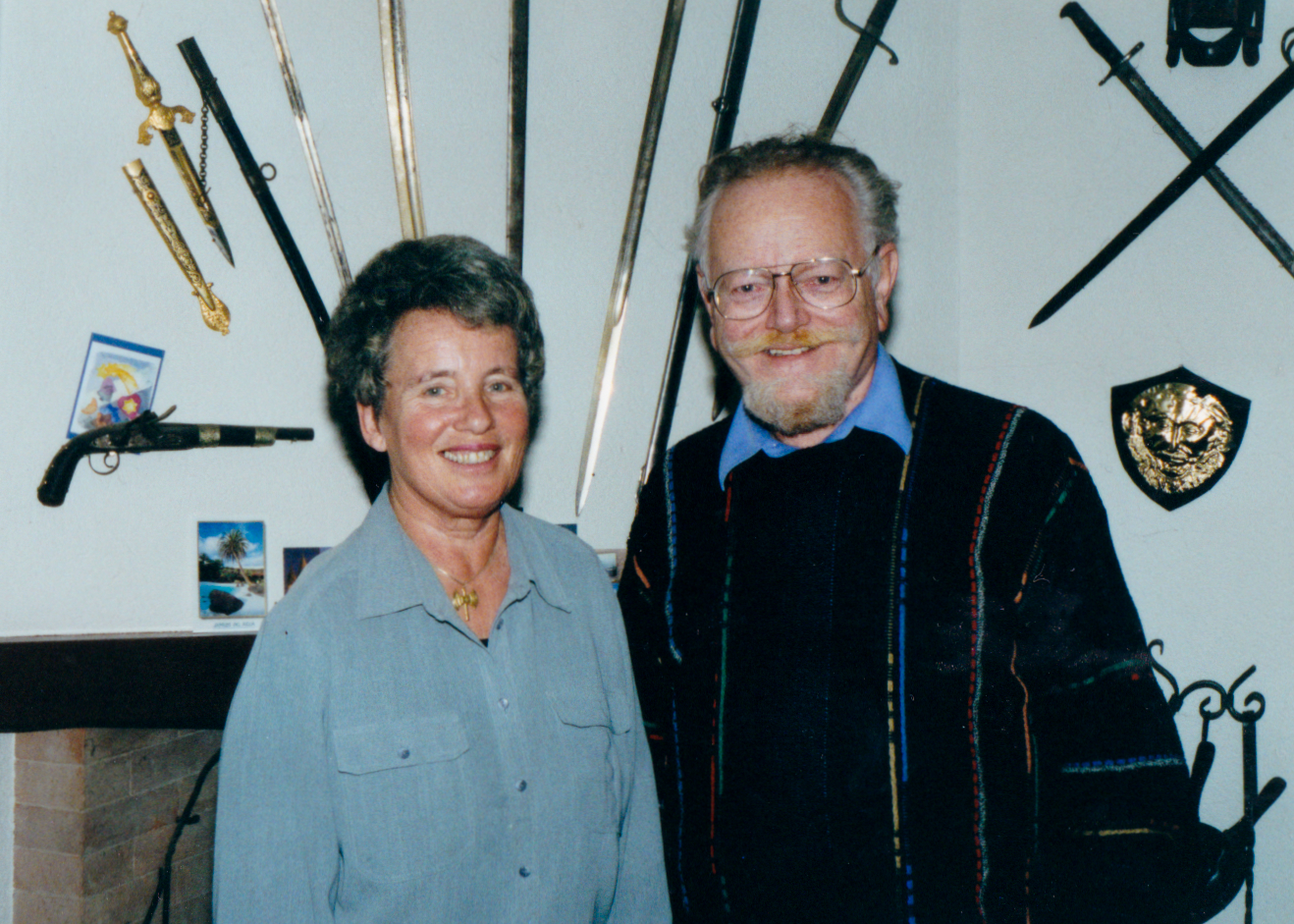 Agnes and Erik Hirschi circa 2001

Chris: We’re fortunate to have a good relationship with Agnes Hirschi, Carl Lutz’ step-daughter. She’s been a real support and ally for the project.

Agnes has been an integral part of accurately portraying not just the diplomatic side of Carl Lutz, but the human side. Since the team first began working with her to now, she has continued to represent her step-father as the world slowly recognizes the great impact he made.

Mike: One of her questions was “why did it take you so long?” And you know, in some ways maybe it wasn’t supposed to be ready until today. Maybe there are just other reasons, other things that are involved. One of those reasons delay was a benefit is the advancement of technology. Cameras got better. Editing and animating software improved. Historical societies have transferred photos and documents to digital archives, making accessing their information easier than ever before. Filming with a drone was a far-fetched dream until recently, but now these advancements made a marked improvement to the quality of telling Carl Lutz’ story. 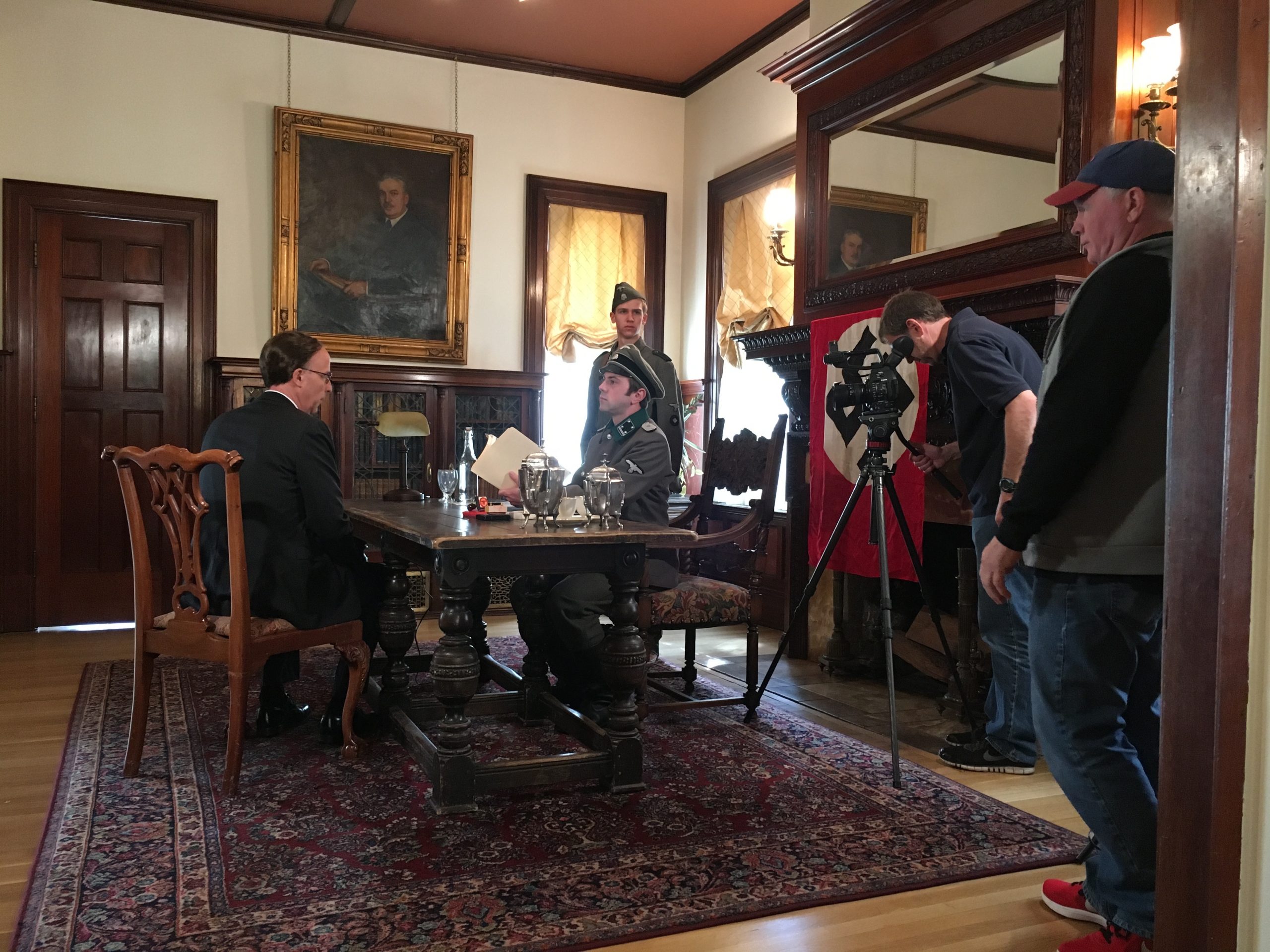 Another change that time brought was the way documentaries are made for modern audiences and the use of reenactments.

Mike: I think the reenactments add so much more to the story. And I think in some ways too, it’s almost what’s expected… You have documentaries out there now that are just all reenactments. And so, I think in some ways the studio—the networks and such… they expect to have a certain amount of current shooting and editing styles. Had we done this and finished this 20 years ago, it still would have been a great story. But I think it’s much better now. 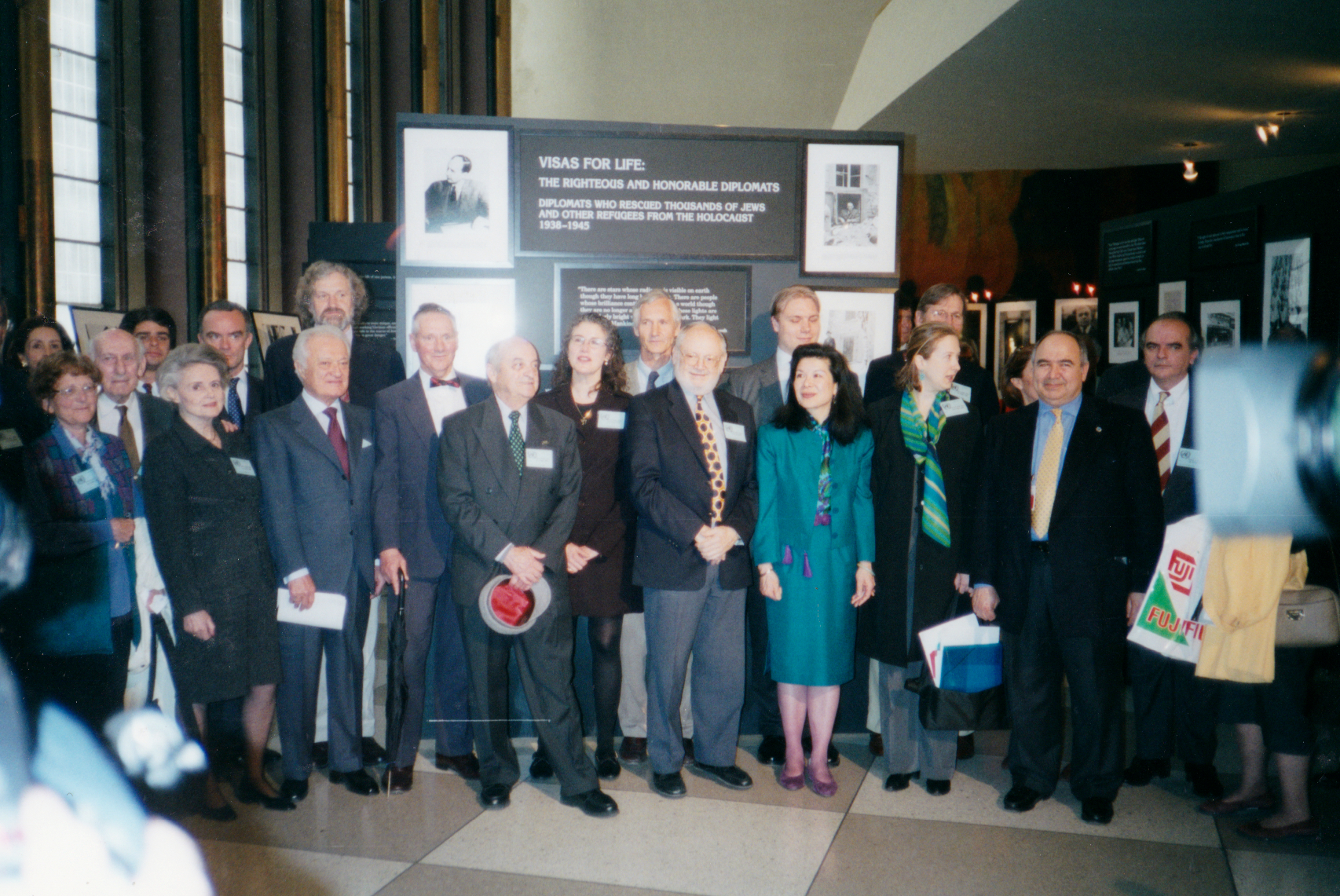 Visas For Life exhibit at UN in New York

Distribution was another element that underwent considerable change. At the beginning, Chris wished he could turn the story into a narrative feature. Mike and Bryan pursued creating a series of six mini documentaries, each focusing on different hidden heroes of the Holocaust. When finishing one proved harder than they’d thought, they changed the idea to “Hidden Heroes of History” and pitched their ideas to different companies and public broadcast stations.

Bryan: I went to a big convention and we showed our 10-minute trailer and … 80% of the respondents were favorable to showing our show. Some of them wanted just a one-off, but some of them wanted the whole series.

In the end though, none of those partnerships worked out. Mike and Bryan realized they would need to focus all their energy on this particular story, the heroic deeds of Carl Lutz, if they wished to see it completed. This focused, simple vision freed them up from needing to secure funding and bring in more storylines. If they could just sell this one story, future installments could be considered.

In the time that passed, a new distribution option became available—streaming over the internet.

Chris: 20 years ago we talked about “maybe it’d be great if we could get it on the History Channel or we could get it on a PBS station,” but then maybe a few thousand people would have seen it and then it goes away. But now, potentially millions of people can see it. 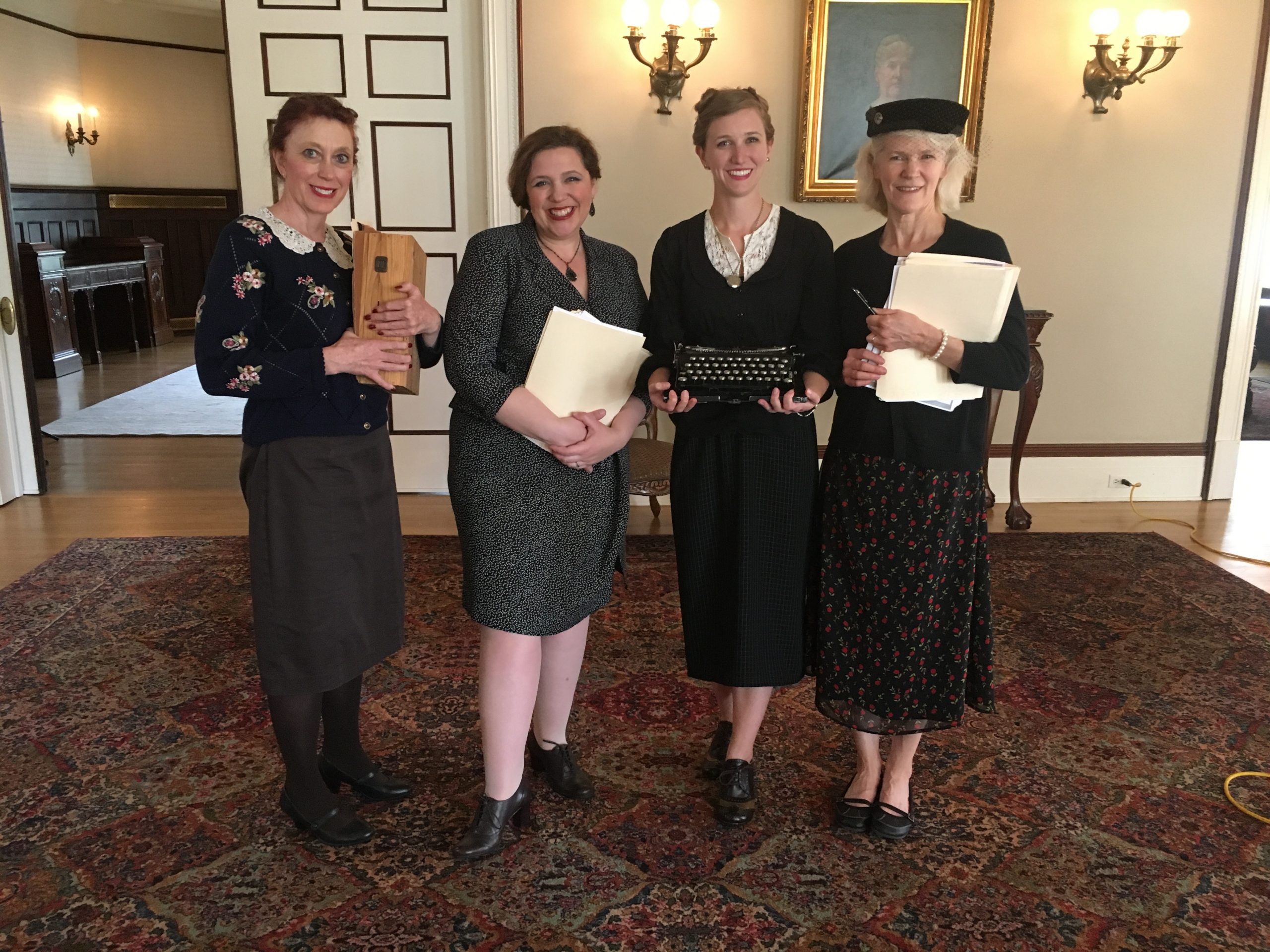 This category includes a variety of benefits. Families grew up and created opportunities for children and wives to participate not just in encouragement, but production and acting. Each of the men matured in not only in years, but also in their craft.

Chris: You know you grow as a writer, and a filmmaker…. The cool thing to me is that [as I]… went back into the script just to look at it and make tweaks, I was just struck by how powerful the story is and that it just holds up. …In terms of the story it didn’t matter if you released it 20 years ago, or now, or ten years from now. It’s kind of an evergreen, powerful story. 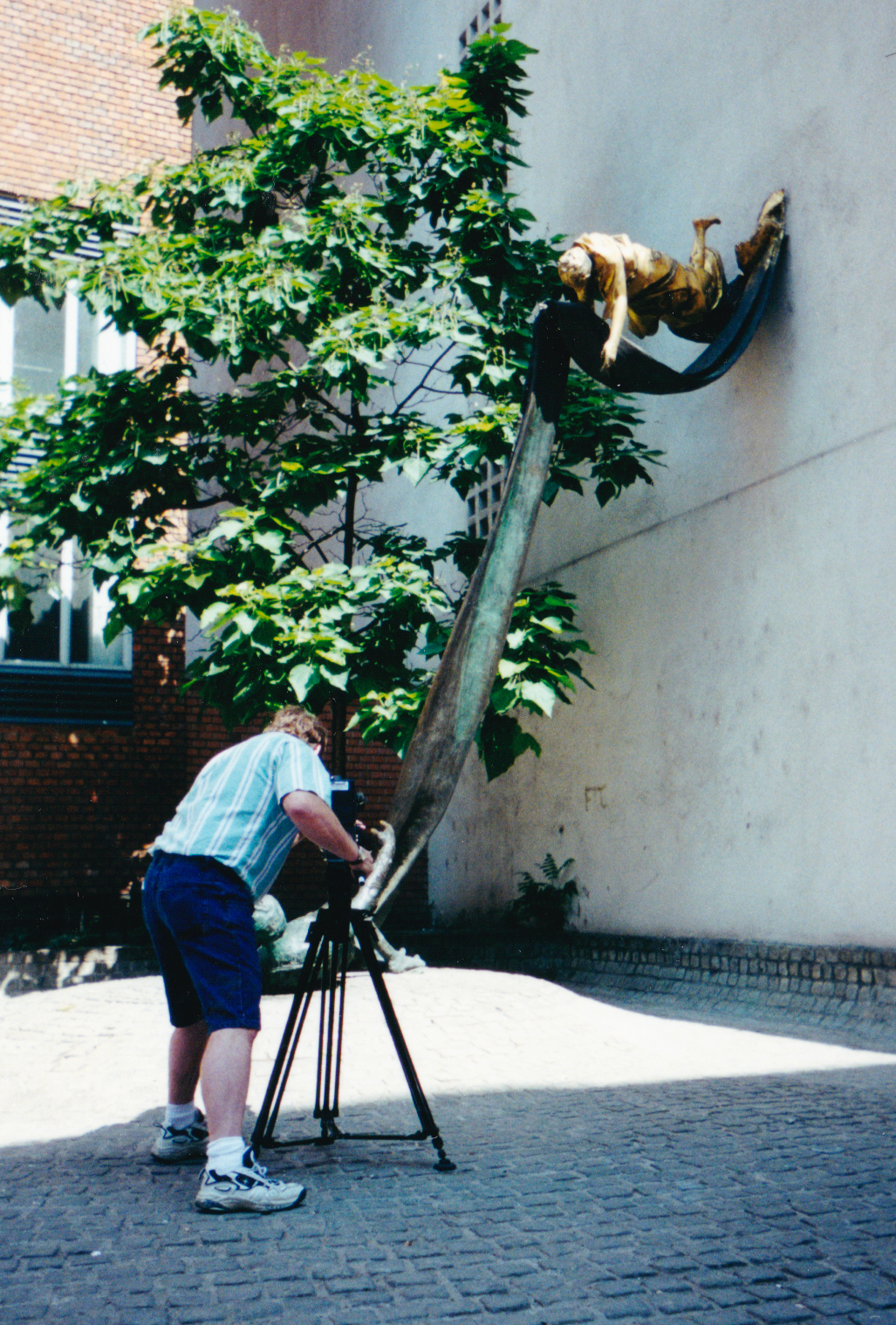 Readiness of the World

The final benefit of releasing in 2020 is that the world seems yet again willing to hear the story of Carl Lutz’ moral courage to stand up for what he knew was right in direct odds with his own government in the middle of Nazi-occupied Budapest. Enough time has passed that viewers are returning to narratives about WWII. Recognition of Carl Lutz has increased across the globe, exposing more people to a man whose actions inspire us to stand for what is right in our own generation. Indeed, it is a story we need to hear.

So it seems that the series of events that delayed and threatened to inhibit the story from being told, produced unexpected benefits in the end by allowing for time and technology to give the story rebirth with a greater potential. It is our hope, that this documentary will honor the courage of Carl Lutz and the lives of the tens of thousands of people saved through his intervention. But just as important, if not more so, we hope that his story will inspire others to do what they can, wherever they are, to ensure hope for today’s world.