Have you noticed the cinematography trend of filming with the handheld look? It has become popular for it’s “in the moment” and gritty feel. Slight motion, racking focus, and edgy framing lend to high-paced action and suspense as well as to films that want to feel more real-time and raw. However, just because something is a popular trend doesn’t mean it should be used for everything. Here are some thoughts on movement by professional cinematographers.

Movement from the Masters

How you film is part of the storyteller’s voice. Usually, a cinematographer would advise picking the tone and sticking with it (framing style, lighting, coloring, etc.) But if we see only fixed shots or every shot has movement, the viewer bores and wears out pretty quickly. Khondji mixed a variety of these elements in order to better communicate the feeling of the scene. It’s rhythm. They didn’t make crazy cuts to be cool, but to draw the viewer into the moment. And it just so happened we like the result and call it “cool.” 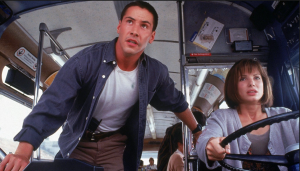 I really like handheld and not necessarily in a chase. Even in straight dramatic scenes just with two people talking. It gives you real intensity, just by looking a little rough.

De Bont brings up the artistry of cinematography. It’s about a feeling. The very nature of slight movement lends action to otherwise static and potentially boring scenes. Going handheld with the camera shouldn’t be reserved only for action sequences like chase scenes, but can be used to instill vibrancy where a fixed shot could fall short.

I think Savides nailed the point of visual storytelling. Cinematography is about finding the best way to visually tell a story. In our fast-paced society, it can be easy to fall into the trap of believing flashier, faster, and bigger equal better. We want the visuals to add to and not detract from the story, but Savides brings up the question of, “Is it really necessary?” The goal isn’t to merely look fabulous, it is to clearly and fully communicate.

Many young video producers use the handheld look for their films. Some of it is artful. Some of it is irritating. Choosing to have a fixed camera or a steady camera doesn’t make one producer old-fashioned or irrelevant and another one right or better at his craft. Cinematography is an art and art is subjective. It is a tool to reach the goal of finding the best way to visually communicate.