By tellmystoryJuly 3, 2017About Us, Other

Offices tell a lot about the person who works there. The things in an office show the person’s interests and personality. Bryan is a collector-not just of stories. After being in the media/video production world for over 30 years, he has seen not only many impressive technological advancements, but been a part of a host of different projects. Photos, awards, keepsakes, and nick-knacks from around the world join stored equipment and tools. Here is a glimpse into the array of artifacts that make up the Visual Legacy Productions museum. 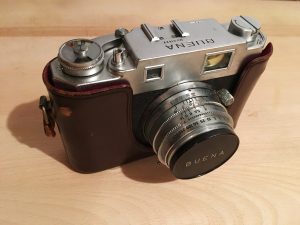 This was Bryan’s first 35mm camera that he used as a boy. It represents the start of his journey. Because of their size, early video cameras were not as easy to store. While it still works, it hasn’t been used in years. Nowadays, we stick to digital instead of film and use Canon. 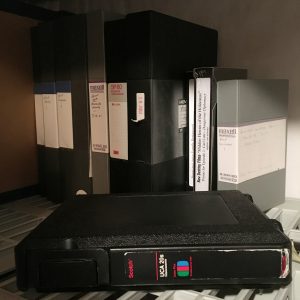 Betacam was to VHS what 8 Track tapes were to cassette tapes- big! Betacam, or Betamax, were used to store video projects for only a few years before VHS came on the scene and soon took over. We have no way of viewing the content on these giants anymore, but still…here they are! 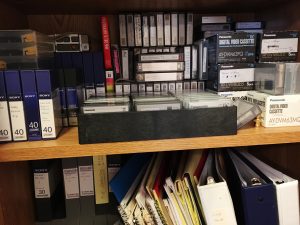 Ahh, the days of Digital Video Camcorders! These little tapes represent a huge jump in portability and storage. They also made recording more readily available! Video recording for personal use suddenly became commonplace. What was a family vacation without dad or mom behind the camcorder? 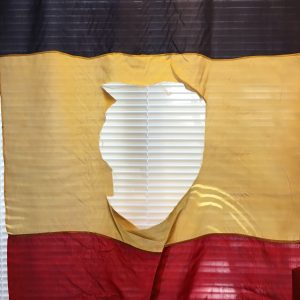 Bryan was working on a project in Romania during the revolution against the Soviet Union in December of 1989. Across the country, uprising citizens cut out the communist symbol from the center of their flags. Before Bryan left, his local contact kindly presented him this flag from their town. 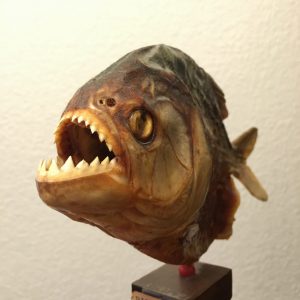 As a child, this piranha from Brazil was one of my favorite items out of all the things my dad brought home. Bryan got the piranha while filming for a ministry in the Amazon. Not only was it fun to show off and scare friends, but it engages the senses of sight, touch, and smell! 😉 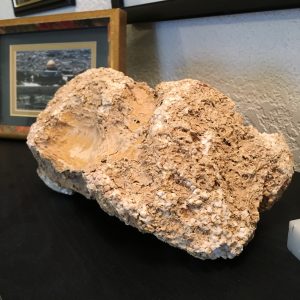 This Styrofoam “rock” was used as a prop in a reenactment filmed in Malta about the apostle Paul, his conversion, and ministry. It was used to stone an innocent man to death. (No one was harmed in the making of the film.) 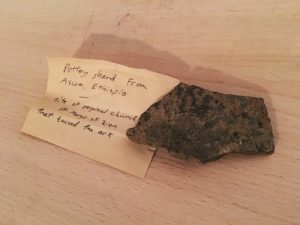 Ethiopia has become a special place to Bryan and there are many artifacts that I could show. This pottery shard was collected during a trip to track down the Ark of the Covenant with BASE Institute. 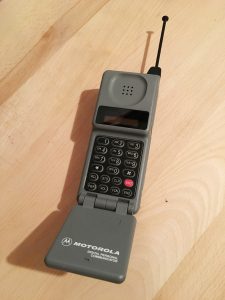 This is the first Digital Personal Communicator. Cell phones have certainly changed over the years. Bryan has always been quick to adopt advancements in technology.

I hope you have enjoyed your little tour of our office and the odd things we save. The things we collect tell the stories of who we are. We’d love to hear about the key pieces that make up your office museums! Please share in the comments!